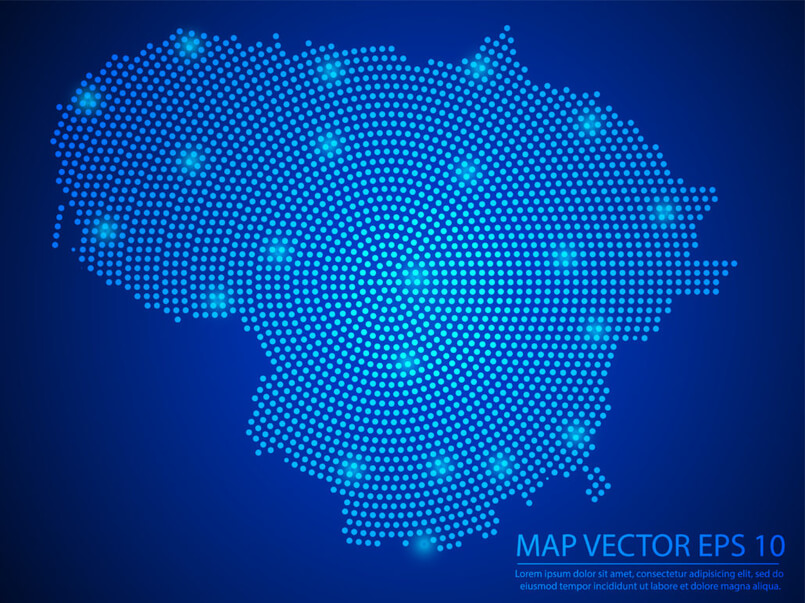 During its inception years, the Internet in Lithuania was slow, but since 2010, it has been improving steadily. Like in the rest of the world, the Internet is the most common source of information and probably the favorite pastime activity in this country too.

Presently, almost every home and workplace in this country have access to the world wide web, while Wi-Fi hotspots cover numerous public spaces. Also, it is important to mention that Lithuanian 4G Internet is the fastest and cheapest in Europe.

Again, like in many other countries across the globe, the most popular websites in Lithuania are Google ‒ as the dominating search engine, YouTube ‒ as the most visited video site, and of course, Facebook ‒ the leading social media website.

It is very interesting that the fiber-optic Internet is blooming in Lithuania. Thanks to active competition in the domestic market and low service prices, a few years ago the number of fiber-optic users reached 34.6 percent.

Still, in spite of the fact that the residents of this Baltic country enjoy a solid Internet connection, they face some obstacles when using the web for personal or business purposes.

If you are a social media manager, you know how difficult it can be to juggle all your clients effectively. Plus, you can easily get blocked by Facebook when you want to post on more than one profile from a single IP.

Why does this happen?

Well, when Facebook detects that you are accessing multiple profiles from one IP address, it thinks you have more than one profile, which is against its rules.

Consequently, it will try to prevent you from doing that by blocking your IP and denying you access.

And it is not only social media managers that face this problem. This also happens to SEO engineers, as well as people who work with data mining and ad verification.

All activities that mean you have to stay on a website for a long time could be identified as suspicious and get you blocked by your target website.

Not to mention YouTube videos that you can’t watch because they are not available in Lithuania.

These and similar problems generally occur because your IP is detected and blocked based on its geographical location or time spent on a website.

Luckily, there are two ways to get around this ‒ a VPN and web proxies.

Virtual private networks are a useful way to connect multiple devices across the Internet. They allow their users to share and access data across devices located in different places. They can be used for business purposes as well as by someone who just wants to access a website or video blocked in their country.

However, VPNs have a few downsides that you are not going to like. VPN users have repeatedly reported having issues with anonymity, slow navigation, an insufficient number of servers and inexperienced providers.

These are some of the reasons that should make you think if you really want to use a VPN at home or at work.

SOCKS method uses a proxy server to exchange network packets between a client and a server. In addition, SOCKS5 provides authentication so that only authorized users are able to access the server.

SOCKS5 proxies are often used as a circumvention tool. To put it more simply, they allow traffic to bypass Internet filtering to access content blocked by Internet service providers, governments, workplaces and schools.

However, you should be extremely careful when using SOCKS proxies since they can be disguised hacked devices which obscure control of a botnet or optimize credit card fraud.

It’s a dangerous world out there and you shouldn’t trust anyone, especially if they are offering you free service.

Have you heard of lietuviskas proxy?

If you want to watch a YouTube video which is blocked in Lithuania, you need to change your IP address to the one that is located in the country that can access the video. The easiest way to do this is to connect to a proxy which is located in that country.

When you surf with a foreign IP, for example, one that is located in the UK, it is much easier to avoid all the obstacles that you face when surfing from Lithuania.

Also, if you want to access Lithuanian web content from another country, you only need to go the other way around ‒ change IP to Lithuania and view any content you want.

Finally, if you want to post on multiple Facebook profiles, you will need rotational proxies. Not only will they hide your IP but also rotate at regular time intervals or with each request so that none of them stays active for long enough to become suspicious to the Facebook server.

All this is possible when you have a premium Lithuania proxy. Get your GeoSurf web proxies today and see it for yourself.